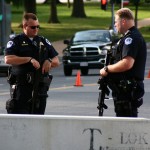 I’ve just finished a paper about motor vehicle checkpoints. It’s available here as a free download. It’s meant as a resource for judges, lawyers, and law enforcement officers, and it includes sections on establishing, operating, and litigating checkpoints. I hope it’s useful, and I’ll be interested in your feedback about it, which you can provide by emailing me or by posting a comment.