My criminal justice students and I visited the British Library this morning to view an original Magna Carta (several originals were created by hand). I had considered taking them to Runnymede, the fabled meadow where the English barons forced King John to sign Magna Carta over 800 years ago in the year 1215. Apart from the time it would take to get there from London, I learned the British had repurposed the space to suit modern life. Runnymede is now considered an . . . 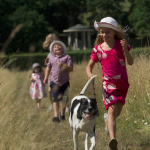 Excellent place to run your dog! Find out more on the Visiting Runnymede with Your Dog website, where “well behaved dogs are welcome in our tea-room”—called the Magna Carta tea-room, of course. Don’t be fooled, though. Both the British and Americans revere the rights enshrined in Magna Carta. In our inimitable way, we Americans are just more outspoken about it.

Take a look at the background of the photo. Look familiar? No, it’s not the Old Well at Carolina, another hallowed shrine. It’s a monument erected in 1957 by none other than the American Bar Association. You can see full images of the memorial here.

Written 800 years ago, Magna Carta contains some objectionable provisions. Villeins (feudal tenants), women, and Jews did not fare well. Magna Carta also contains many outdated provisions. You can open the document to just about any place and find provisions about forests, ale, cloth-dying, knight service (and how to get out of it), and other concerns of the feudal age.

More important, you can find fundamental principles of justice, which have informed and should continue to inform our criminal justice system. Probably the most famous provision is the “law of the land” clause, no. 39 if you’re reading a modern translation. The original Magna Carta had no numbers and no paragraphs:

Does Clause 39 sound familiar (once you find it)? Our state constitution states, in Article I, Sec. 19, that “[N]o person shall be taken, imprisoned, or disseized . . . but by the law of the land,” language taken nearly verbatim from Clause 39 of Magna Carta. The law of the land concept establishes the fundamental principle that the king, government, state, or other authority must follow the rule of law. The U.S. Constitution embodies this principle in the Due Process Clause of the Fifth Amendment.

The students in the class identified several other provisions essential to our modern conception of justice, including among others:

Some provisions speak across the centuries to current issues under debate. Clause 20, above, allows punishments in accordance with the severity of the offense, but “saving” the defendant’s way of life, stock-in-trade, and means of livelihood. This 800-year old statement of principle remains relevant as we consider the appropriateness of the collateral consequences that follow a criminal conviction.

Another pertinent principle appears in Clause 40, which states: “To no one will we sell, to none will we deny or delay, right or justice.” Magna Carta scholar A.E. Dick Howard has observed that “[i]f taken to mean that the courts should be open to rich and poor alike, it commends itself to modern times as well.” A.E. Dick Howard, Magna Carta: Text and Commentary at 15 (1964). This basic truth brings to mind the current debate over court fees, costs, and other monetary obligations.

The old parchment still has a lot of life left in it. I want to end this post by thanking Julian Harrison, Curator of Pre-1600 Historical Manuscripts at the British Library, for taking time out of his day to host us this morning.