In January 2020, North Carolina’s Twenty-First Judicial District (Forsyth County) implemented a consensus bail reform initiative in the form of a structured decision-making tool for magistrates and judges when making bail decisions. Some key features of the tool include:

The new decision-making tool was developed by a stakeholder team that included judges, prosecutors, public defenders, clerks, magistrates, law enforcement leaders, and others. One of the working group’s primary goals was to reduce pretrial detentions of individuals who do not pose a pretrial risk but are detained solely due to inability to pay bail. The UNC School of Government Criminal Justice Innovation Lab supported stakeholders in the development and implementation of the new tool and, with support from local stakeholders, is conducting an empirical evaluation of its impact. We recently released a report (here) from the first year of the evaluation. This post summarizes key findings.

Magistrates imposed conditions other than a secured bond in the majority of cases.

After implementation of reforms, magistrates imposed a written promise, custody release, or unsecured bond in 58.52% of all cases. For Class 2 and 3 misdemeanors, which were the target of the reforms, they imposed a condition other than a secured bond in 72.71% of cases. Table 1 below shows the distribution of conditions set by magistrates by offense category. As expected, as the severity of the offense increased, the likelihood of receiving a secured bond increased, as did median bond amounts. 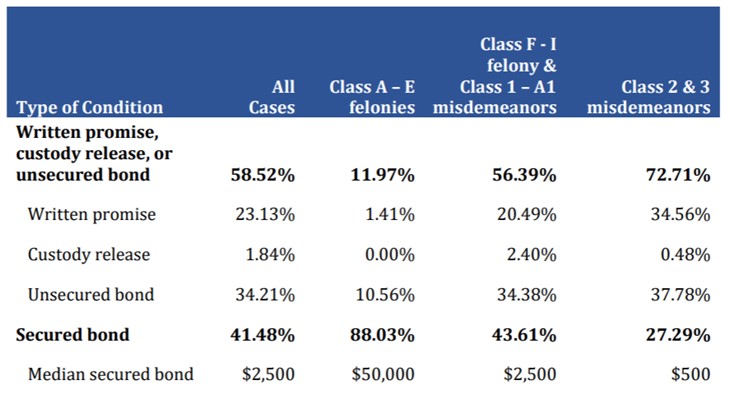 Judges imposed conditions other than a secured bond in the majority of target cases. 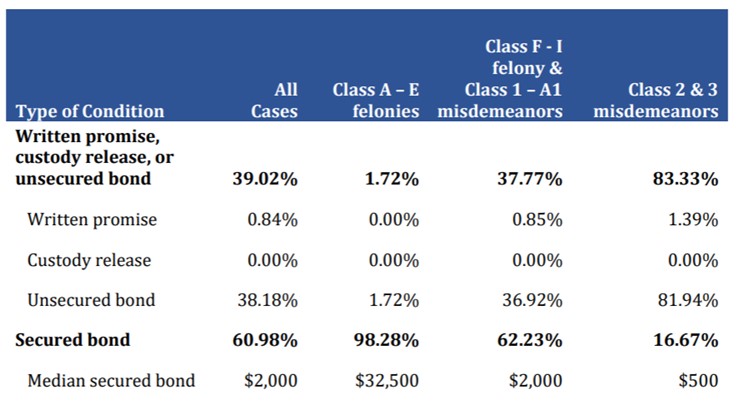 In bail decisions set by magistrates, initial analyses showed that there were no statistically significant differences in the likelihood of receiving a secured bond between cases involving Black individuals and those involving White individuals for Class 2 or 3 misdemeanors or Class A-E felonies. By contrast, initial analyses showed that intermediate-level cases involving Black individuals were more likely to receive a secured bond than cases involving White individuals. However, we conducted additional analyses and found that this difference was not statistically significant when we accounted for case-specific factors, such as prior conviction and history of failure to appear.

In bail decisions set by judges, cases involving Black and White individuals were equally likely to result in a secured bond for all offense categories.

Implementation of the bail decision-making tool is strong

The decision-making tool preserves judicial officials’ discretion to deviate from its recommendations. When we examined deviations, we found that both judges and magistrates adhered to the decision-making tool’s recommendations in the majority of cases (64.64% of cases for judges; 79.21% for magistrates). Magistrates reported that it takes 3-5 minutes to complete the tool’s associated form, and they completed the vast majority of the forms without errors.

The percent of individuals incurring a new pretrial criminal charge decreased 2.63 percentage points after implementation of the new tool. While there were some statistically significant increases in certain offense sub-categories, the largest increase was in non-violent, non-traffic misdemeanors. Additionally, similar increases were also observed in the District’s peer counties, suggesting that these increases may be attributable to other factors.

Figure 1: Number of pretrial detentions by month for Black and White individuals 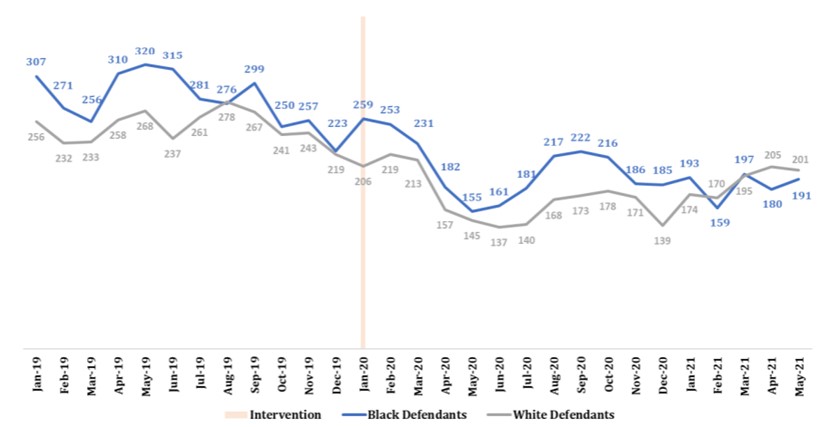 Please see the full report for more details about the project and the evaluation results. The evaluation will continue through December 2021.

This project is being led by Professor Jessica Smith at the UNC School of Government Criminal Justice Innovation Lab. Professor Jamie Vaske at Western Carolina University leads the empirical evaluation. If you have questions about the project, please contact me at mbailey@sog.unc.edu.