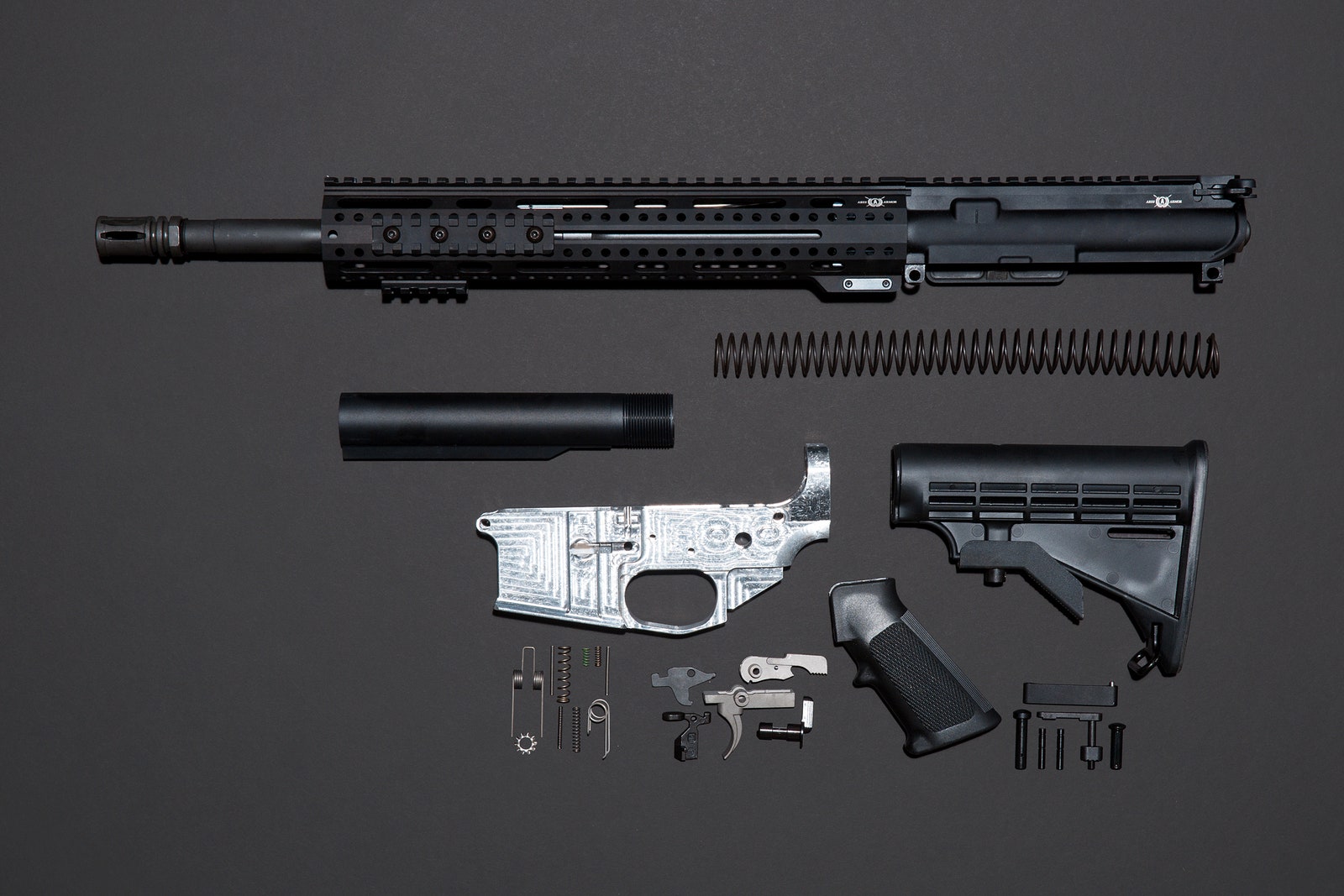 Last week, President Biden announced several new executive actions on firearms, including: calling for an updated report on firearms trafficking; nominating a new director for the Bureau of Alcohol, Tobacco, Firearms and Explosives; and ordering the Department of Justice to draft new regulations that will treat handguns equipped with pistol braces as short-barreled rifles under the National Firearms Act, along with publishing a model “red flag” law for states to use as a guide. Jeff Welty and Shea Denning have previously written about red flag laws here and here.

One order in particular seems to be getting a lot of attention: instructing the DOJ to issue a proposed rule within 30 days to address “ghost guns.” I’ve gotten a few questions recently from law enforcement officers and prosecutors about ghost guns and the applicable law, so this post provides a summary of three topics: (i) what are ghost guns; (ii) why are they coming up as an issue now; and (iii) what do our existing state and federal laws say about them?

But First — a Brief Detour Through Ancient Greece

Let’s start with a modern version of the old Ship of Theseus logic puzzle: imagine a person buys an AR-15 rifle off the shelf at a gun store, and over time he customizes it with various replacement parts and upgrades. Eventually he has installed a new barrel, stock, trigger, magazine, firing pin, grip, sights, and other components. Is it still the same gun? Take your time. Philosophers have been working on that answer for a couple thousand years.

For criminal law purposes we need clear guidance, not a metaphysical debate, so the statutes generally pin the answer on one central component of the firearm known as the frame or lower receiver. The receiver is the core piece of a firearm that encloses or provides a platform for all the other parts. In other words, the receiver is the firearm, while all the other parts are just… parts. See 18 U.S.C. § 921(a)(3) (defining a firearm as “any weapon…which will or is designed to or may readily be converted to expel a projectile by the action of an explosive” or “the frame or receiver of any such weapon”); see also G.S. 14-409.39 (defining firearm).

For the same reason, a person buying a new stock or a new barrel can simply order them online and have them shipped to his house. Because after all, he’s not buying a gun, he’s just buying some parts. By contrast, a person buying a lower receiver is essentially buying a new firearm, so per the state and federal laws discussed below, the receiver would need to have a serial number and other statutorily required information (such as the caliber and place of manufacture) engraved on it, and it may only be shipped to a licensed firearms dealer who must conduct a background check on the purchaser.

Or rather, that used to be the case.

What are Ghost Guns?

The term ghost gun refers to a firearm, including the frame or receiver, that is manufactured or assembled entirely by an individual from parts and raw materials. Since there is no sale of a “firearm” occurring, there is no paper trail documenting ownership (or even the existence) of the assembled firearm, and no background check to determine whether the person may lawfully possess it.

In some ways, this is not a new issue. “Zip guns,” which are improvised firearms constructed out of other materials like a metal pipe, rubber band, and a nail, have been around for decades. See, e.g., People v. Cotton, 22 A.D.2d 692 (N.Y. App. Div. 1964) (“The defendant was indicted for unlawful possession of a loaded zip gun, as a felony”). More recently, the issue of home-built guns captured headlines in 2012-2013 when plans were released online that would allow anyone to create a functioning firearm (the most well-known being the Liberator) using a 3-D printer. However, due to their limited effectiveness, the specialized equipment required to build them, or both, homemade and 3-D printed guns continued to be pretty uncommon.

Why Are They Back in the News Now?

This situation began to change a few years ago, primarily due to the introduction of “unfinished receivers,” also known as 80% receivers, 80% lowers, or receiver blanks. Unfinished receivers are molded pieces of metal or polymer that require some additional finishing work by the purchaser in order to become a functional lower receiver. Typically, this work only required a few shop tools and relatively simple steps, such as using a drill press to create additional holes. In the last couple years, user-friendly CNC milling machines like the Ghost Gunner have made the home finishing process even faster and easier.

Nevertheless, as explained on the ATF’s website (available here, with sample photos), as long as a receiver has not been finished beyond a certain point at the time it is sold or transferred, it does not yet qualify as a “firearm” and therefore it is not subject to federal regulation:

Receiver blanks that do not meet the definition of a “firearm” are not subject to regulation under the Gun Control Act (GCA). ATF has long held that items such as receiver blanks, “castings” or “machined bodies” in which the fire-control cavity area is completely solid and un-machined have not reached the “stage of manufacture” which would result in the classification of a firearm according to the GCA.

By finishing the receiver at home and installing the remaining parts, an individual can assemble a working firearm that is virtually identical in appearance and function to one built by a traditional manufacturer. Because these firearms are unregistered and untraceable, it is impossible to know exactly how many of them exist or who possesses them, but the ATF recently reported that approximately 30% of the firearms it recovered in California were ghost guns, suggesting that the numbers nationwide may be quite high. Other cities and states reporting a sharp increase in the prevalence of these guns in recent years include Washington, D.C., Philadelphia, Maryland, and many others.

What Are the Current Laws?

As noted above, a “finished” lower receiver is generally considered a firearm, so it is required by federal law to have a serial number and other identifying information (see 27 C.F.R. § 478.92), and it is subject to all the normal purchasing and transfer requirements like conducting a background check. However, when an individual constructs a firearm from an unfinished receiver and other components for personal use, there is no comparable federal requirement to affix a serial number or undergo a background check. As for state law, California, Connecticut, Hawaii, New Jersey and a few others have recently enacted laws that prohibit the sale or receipt of unfinished receivers or kits, or make it a crime to assemble a firearm from such parts, or simply require that any assembled firearm be registered with a unique serial number, a process that includes verifying that the builder is lawfully permitted to possess the firearm.

But based on my research (as always, please correct me if I’ve missed something), there are currently no state of federal laws that would prohibit an otherwise eligible individual in North Carolina from purchasing unfinished parts and assembling a ghost gun strictly for personal use, nor is that person required to engrave a serial number on the firearm or register it after it is built. Cf. G.S. 14-160.2 (prohibiting removal of a serial number from a firearm or the possession, sale, or purchase of a firearm with the serial number removed, but apparently inapplicable to a homemade firearm that is not required to have a serial number); see also 18 U.S.C. § 922(k); 26 U.S.C. § 5861(h) (similar federal laws addressing removal of a serial number from a firearm).

There are, of course, a wide variety of criminal laws that remain applicable in North Carolina cases involving ghost guns. For example, regardless of whether it was purchased from a gun store or built in the garage, a convicted felon in possession of that firearm would still be in violation of 18 U.S.C. § 922(d) and G.S. 14-415.1. The same holds true for numerous other criminal laws regarding concealed weapons, weapons of mass destruction, firearms on educational property, possession of firearms by minors, or the possession of specially regulated or modified firearms such as automatic rifles, short-barreled rifles, and suppressors.

Additionally, although federal law does not currently require a serial number on a firearm manufactured solely by an individual for his or her own use, other activities such as assembling a firearm for someone else, transferring ownership to another person, or engaging in the business of building firearms for the purpose of sale or transfer, do still require the addition of a serial number and other identifying information on the firearm, and may require other steps such as obtaining a federal firearms license to engage in the business of making and selling guns and conducting background checks. See 18 U.S.C. § 921-923.

Depending on who you ask, the subject of this post is either a dangerous loophole that makes it easy for convicted felons and other prohibited individuals to obtain untraceable firearms, or it’s a non-issue because anyone who should not be allowed to make, possess, or transfer one of these guns is already prohibited from doing so by other laws. I’m not expressing an opinion either way, but the federal government has been under increasing pressure to take action to address ghost guns (including lawsuits filed by state and local governments), and pursuant to last week’s order there will be some type of federal regulation proposed in the next few weeks.

A federal ban on the sale or use of unfinished receivers and assembly kits seems unlikely. Bills along those lines have been attempted before without success (see H.R. 2910 in 2013, S. 3743 in 2020), although perhaps the growing number of homemade firearms in recent years has moved the political needle. Another alternative might be to require serial numbers on all unfinished receivers and treat them as “firearms” for possession and sale purposes, on the grounds that even in an unfinished state they constitute devices which are “designed to or may readily be converted to expel a projectile by the action of an explosive.” That approach sounds simple in theory, but given the emerging technology that allows an amateur to do increasingly complex finishing work at home, how will the law draw a clear line to distinguish whether a block of raw material has crossed the line to become an unfinished receiver subject to the new regulation? Another possible outcome, which would likely leave both sides unsatisfied, is a federal regulation that continues to allow the sale of unfinished receivers and assembly kits, but requires a serial number, registration, and a background check whenever they are used to construct a firearm, even if it’s only for personal use.

Whatever ends up being proposed or passed, the legal challenges are sure to follow, and there will undoubtedly be more to say about these laws in the years ahead.