These reforms were developed by a stakeholder team including judges, prosecutors, public defenders, clerks, magistrates, and law enforcement leaders. One of the team’s goals was to reduce pretrial detentions of individuals who do not pose a pretrial risk but are detained due to inability to pay bail. The UNC School of Government Criminal Justice Innovation Lab supported stakeholders in the development and implementation of reforms and, with support from local stakeholders, conducted an empirical evaluation of their implemented reforms. We recently released a final report (here) on that evaluation. This post summarizes key findings.

Conditions other than secured bonds were imposed in the vast majority of target cases. After implementation of reforms, secured bonds were imposed in just over half (53.90%) of all cases. However, only 25% of Class 3 Misdemeanors, which were the target of the reforms, received a secured bond. Table 1 below shows the distribution of conditions of release by offense type. As shown there, most people charged with Class A – E felonies got a secured bond (80.91%); for intermediate offenses that rate was just over 53%. 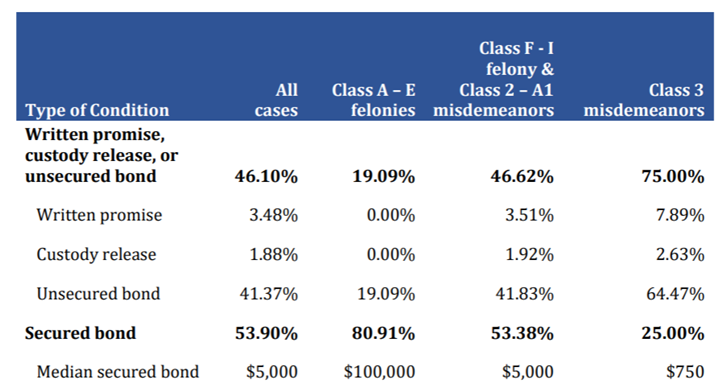 The decision-making tool promoted equity goals. There were no statistically significant racial differences between individuals who received secured bonds for Class A – E felonies or Class 3 misdemeanors. Intermediate-level cases involving Black individuals were more likely to receive a secured bond than cases involving White individuals, but this difference disappeared when we accounted for case-specific factors, such as prior conviction and history of failure to appear.

Implementation of the bail decision-making tool was strong. The decision-making tool preserves magistrates’ discretion to deviate from its recommendations. When we examined deviations, we found that magistrates followed the tool’s recommendation in 74.82% of cases. Magistrates also executed the vast majority of forms without error and reported that it takes between three and five minutes to complete the tool’s associated form.

There was no statistically significant change in court non-appearance rates in four of the District’s five counties (Beaufort, Martin, Hyde and Tyrrell Counties). Washington County, however, experienced a statistically significant 2.73 percentage point increase in this metric, recording 89 instances of nonappearances in the pre-implementation period and 91 in the post-implementation period.

Pretrial detentions decreased by 33.90%, a result likely impacted by the pandemic. Our analyses of jail bookings used data supplied by the Beaufort County Detention Center, the only District jail that provided data. The average number of pretrial bookings per month decreased 33.90% in the post-implementation period. In the pre-implementation period, there was an average of 143 pretrial bookings per month compared to 95.11 per month after implementation of reforms. Decreases were seen for both Black and White individuals (Figure 1). Given that the reforms targeted lower-level misdemeanor charges, we expected to see larger decreases in bookings for misdemeanor offenses. However, that did not occur. Rather, declines in bookings were similar for both felony and misdemeanor charges. We note that decreases in bookings may reflect the impact of the COVID-19 pandemic, which began just months after the new policies were implemented.

Figure 1. Number of pretrial bookings into the Beaufort County Detention Center by race 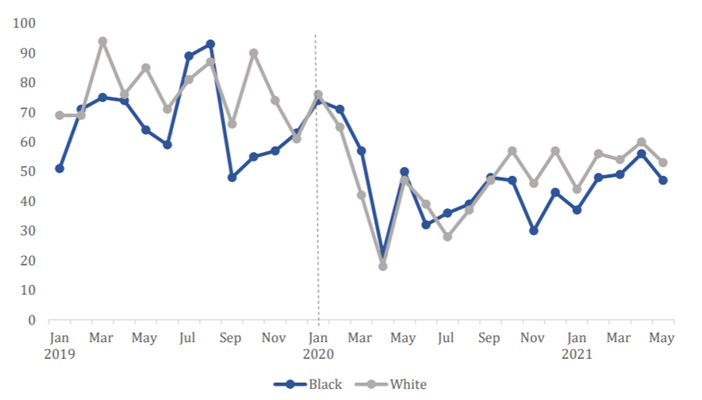 Stakeholders intend to continue reforms. At a meeting where we presented a draft of our report for their feedback, stakeholders indicated that they were pleased with the evaluation results, that the District was meeting its pretrial goals, and that they planned to continue with the implemented reforms. They further indicated that there was strong buy-in among local stakeholders for the reforms. We also discussed that with the recent passage of Senate Bill 300, requiring first appearances for detained individuals within 72 hours, some changes to the District’s first appearance procedures would be needed. However, stakeholders’ proactive work prior to introduction and passage of that legislation positions them well to make needed adjustments.

Our full report contains more details about the project and evaluation results.

This project was led by Professor Jessica Smith at the UNC School of Government Criminal Justice Innovation Lab. Professor Jamie Vaske at Western Carolina University led the empirical evaluation. If you have any questions about the project, please contact me at mbailey@sog.unc.edu.