Intuitively, the answer seems obvious—a clean record should reduce reentry barriers for employment and other opportunities. Yet, data on the impact of expunctions is elusive because, by their nature, expunged records are unavailable to analyze. No longer. A recent study by J.J. Prescott and Sonja B. Starr, law professors and co-directors of the Empirical Legal Studies Center at the University of Michigan, presents the results of a statewide study pursuant to a data-sharing agreement with the State of Michigan.

In Expungement of Criminal Convictions: An Empirical Study, Professors Prescott and Starr examined the criminal records of people who had obtained a criminal record “set-aside,” Michigan’s version of an expunction. Although the details differ, Michigan’s expunction laws are broadly representative of expunction laws in other states. The authors also obtained the records of people whose convictions had not been set aside. They compared this information with wage and employment data from the state’s unemployment insurance program. Armed with this data, they investigated three main questions.

First, the authors looked at subsequent reoffending by people who had received a set-aside. The result?

According to the authors, this finding tends to defuse the most common public safety argument against expunctions: that employers, landlords, and others need to know about all criminal records of the people with whom they interact. Id. at 5.

Reviewing the employment history of people who had received a set-aside in Michigan, the authors found “large improvements in the employment rate and wages on average—and, in particular, a reversal of the pre-set aside downward trends that we see for recipients as a group.” Id. at 48. Below are two charts illustrating their findings. Id. at 46–47. The first shows the employment rate for people earning more than $100 per week (a more demanding standard than mere employment, although that rate also rose after receipt of a set-aside). The second shows average wages. 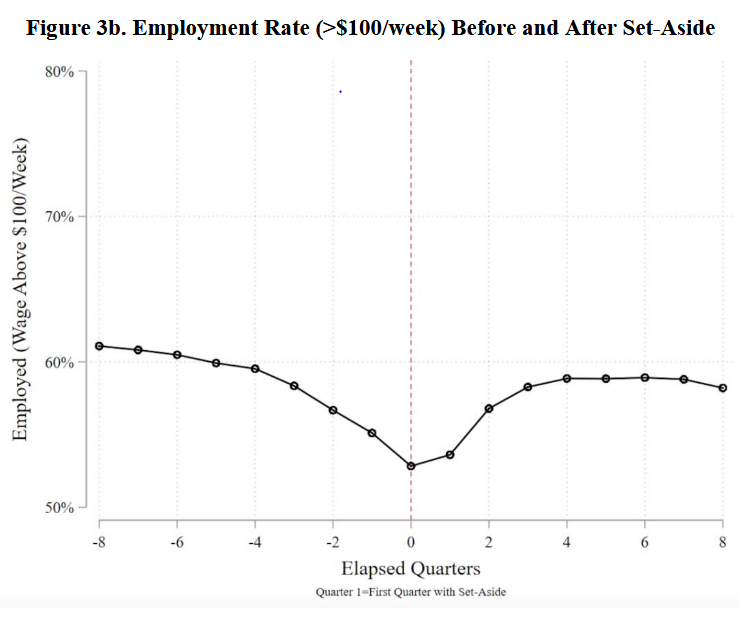 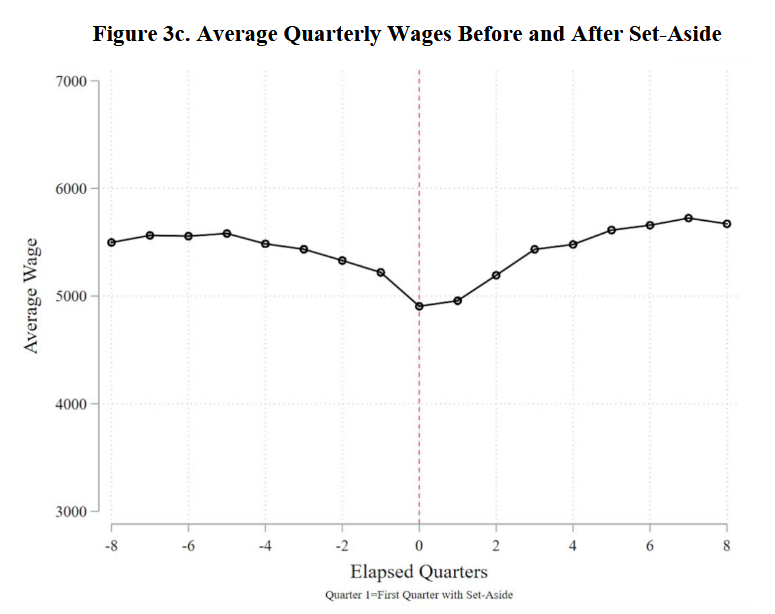 Third, the authors examined “uptake rate”—that is, the rate at which people who are legally eligible for a set-aside actually receive one. The authors found the rate discouragingly low. Only 6.5% of eligible individuals obtain set-asides within the first five years after they qualify. Id. at 5. The authors suggested several possibilities for this “uptake gap,” including lack of information, administrative hassle and time constraints, fees, distrust and fear of the criminal justice system, lack of access to counsel, and insufficient motivation to remove a conviction. On this last point, one interviewee observed, “‘A lot of people don’t prioritize it until [the conviction] is a problem,’ such as when they are trying to pursue an occupational license.” Id. at 30–33.

The authors also considered concerns about eligibility criteria. They observed:

Finally, it bears noting that, although our interviews focused mainly on the problem of low uptake among eligible offenders, every advocate that we spoke to also emphasized the stringency of the eligibility requirements, which in their view exclude a great many worthy candidates. Reforms in 2011 and 2015 [in Michigan] slightly softened the requirements regarding the number of convictions, but they are still stringent and in many ways quite arbitrary. Id. at 33.

What are some takeaways for North Carolina? Our General Assembly has recognized the benefits of expunctions in the last several years. Among other things, it has authorized expunctions of older nonviolent felony and misdemeanor convictions and removed the one-per-lifetime limit on expunctions of non-conviction records (dismissals, acquittals, and other dispositions that do not end in a conviction). See Recent Legislation, in John Rubin, Relief from a Criminal Conviction (UNC School of Government, 2018 ed.).

Two bills introduced this session would begin to address the “uptake gap” identified in the Michigan study. Senate Bill 82 and House Bill 132 would provide for automatic expunction of non-conviction records, without the filing of a petition by the affected person and the associated barriers that come with the petition process. Other bills introduced this session would continue to expand eligibility. See, e.g., House Bill 202 and House Bill 284 (expanding eligibility for expunctions of older felony and misdemeanor convictions).

The proposed bills continue a trend, here and in other parts of the country, to maximize the benefits of expunctions. With release of the Michigan study, policy makers now have empirical data to help inform their efforts.