We previously reported on North Carolina state and county-level criminal charging data. In our earlier report (here) we provided data on charges, charged defendants and charged cases for felonies and misdemeanors, and broke misdemeanors down into non-traffic and traffic offenses. In this report, we present more detailed information about the nature of the felony and misdemeanor charges brought in North Carolina in 2019. For felony offenses, we provide data at the state and county level on, among other things, the number of non-violent and violent felony charges, and separate out drug charges. At the misdemeanor level, we parse the data into still more categories, including breakdowns for, among other things, DWI and related charges, non-DWI traffic charges, ordinance violations, and non-violent and violent misdemeanor charges. There is a lot to unpack in our new spreadsheet. In this report, we present some of the top line results. A spreadsheet with the data is available here. 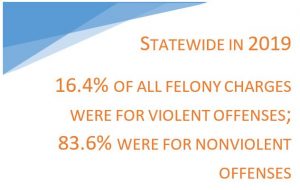 Our analysis shows that violent crimes constitute a relatively small percentage of all charged crimes, for both felonies and misdemeanors. In 2019, there were 342,618 felony charges statewide. Only 16.4% of those charges were for violent crimes; 83.6% were for nonviolent offenses. Felony drug crimes make up almost 33% (112,648 charges) of total felony charges. Even when felony drug charges are removed from the analysis, violent offenses constitute only 24.4% of the remaining felony charges. As described below, we took a liberal approach to categorizing offenses as violent or nonviolent. For example, even though burglary does not include an element of violence, we categorized it as violent on the reasoning that such a categorization best aligns with the seriousness that judicial system stakeholders and citizens attach to that offense. We took a similar approach with other felony offenses, and we describe our categorization rules below. 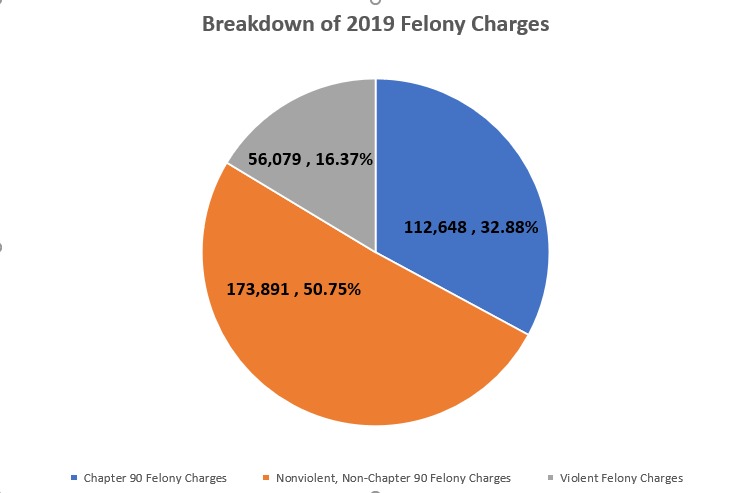 With respect to violent felony charges, only 14 offenses, shown in Table 1 below, had over 1,000 charges statewide. Armed robbery tops that list, with 5,176 charges, followed by indecent liberties with 4,621 charges. Table 2 below presents the most commonly charged nonviolent felonies. Obtaining property by false pretenses tops that list. It is followed by two breaking or entering offenses—felony breaking or entering and breaking or entering a motor vehicle—with 14,388 and 13,941 charges respectively. We categorized drug offenses as nonviolent felonies, and several of those crimes show up in Table 2. Because Chapter 90 drug felonies constitute so many of the charged felonies in 2019, we include Table 3 below, showing the most commonly charged drug offenses. As shown there, maintaining a dwelling was the most charged drug felony (12,679 charges), followed by possession of methamphetamine (11,816 charges). 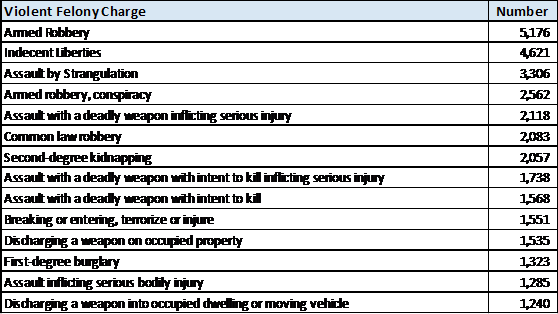 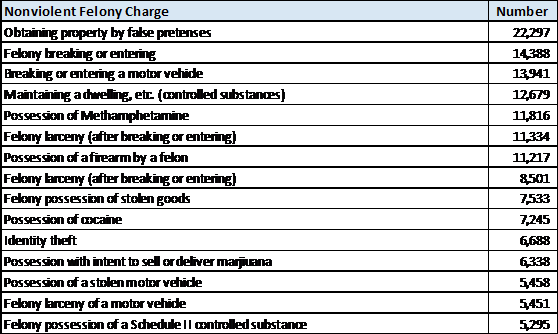 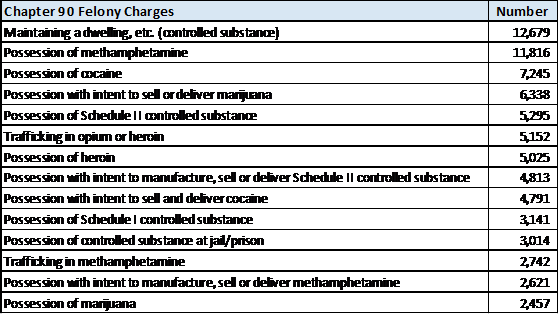 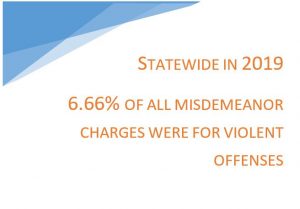 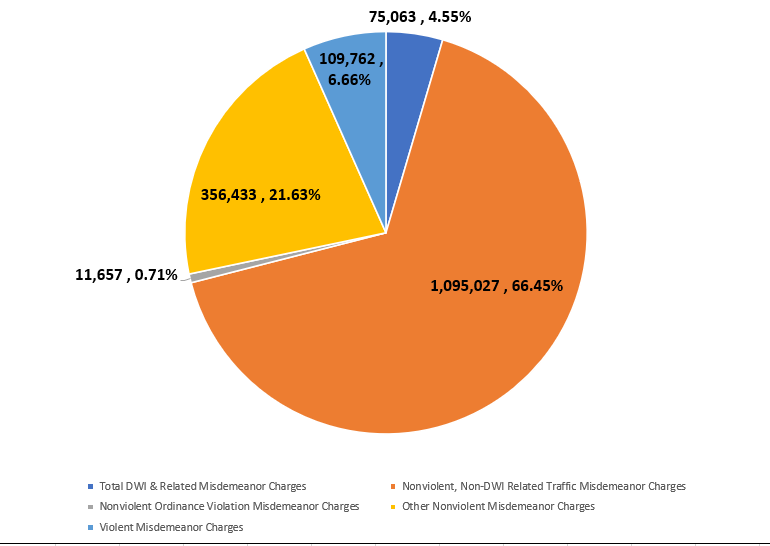 Tables 4 and 5 below show the most commonly charged violent and nonviolent misdemeanor crimes. Misdemeanor larceny tops the nonviolent misdemeanor list, with over 44,000 charges statewide, while assault on a female tops the violent misdemeanor list, with over 27,000 charges. As with felony offenses, we took a liberal approach to categorizing misdemeanors as violent crimes. For example, although communicating threats does not include an element of physical violence, we categorized it as violent on the reasoning that that approach was in line with how judicial system stakeholders and community members view that offense. More detail on our categorization rules is provided below. 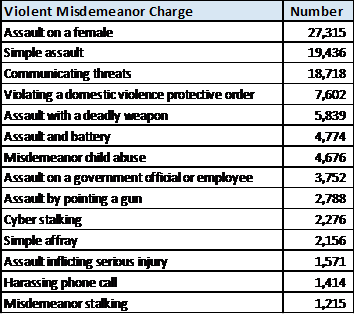 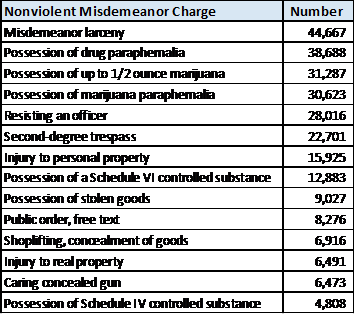 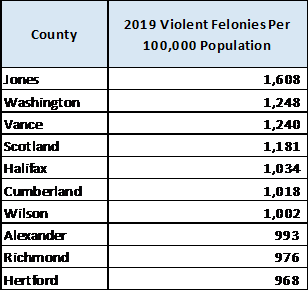 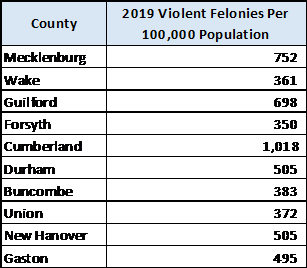 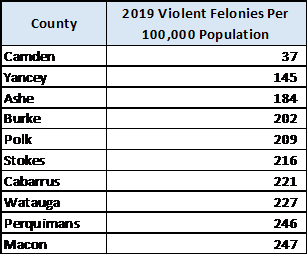 As with our prior report, this analysis was conducted using the North Carolina Administrative Office of the Courts “Tally Report.” Detailed notes of how we processed the data in that report are contained in our spreadsheet’s “Read Me” tab. For purposes of categorizing offenses as violent and nonviolent, we categorized general crimes the same as the main offense. For example, we categorized attempted robbery as violent, like robbery. Some offenses are obviously violent, such as first-degree murder, or nonviolent, such as food stamp fraud. A table showing how we categorized other offenses is included in the “Read Me” tab in our spreadsheet. It clarifies, for example, that we categorized gang offenses as violent and disorderly conduct as nonviolent. This report includes additional detail on specific offenses, not included in the spreadsheet noted above. If you are interested in learning more about your county’s experience, please reach out and we will try to help you.