Charged with identifying best practices and offering recommendations on how policing practices can promote effective crime reduction while building public trust, the Presidential Task Force on 21st Century Policing recommended that law enforcement agencies develop and adopt policies and strategies that reinforce the importance of community engagement in managing public safety. Specifically, it recommended that agencies adopt preferences for “least harm” resolutions, including the use of citation in lieu of arrest for low-level offenses. Increased use of citations offers other potential benefits, including increased law enforcement efficiency. A report by the International Association of Chiefs of Police found that citations offer a time savings of just over an hour per incident. Additionally, increased use of citations can help reduce unnecessary pretrial detentions of low-risk defendants and associated costs, unfairness, and negative public safety outcomes. An arrest triggers an initial appearance and imposition of conditions of pretrial release. Because secured bonds are the most common condition imposed in North Carolina, see Jessica Smith, How Big a Role Does Money Play in North Carolina’s Bail System (July 2019), the decision to make an arrest versus issue a citation often results in imposition of a secured bond and associated wealth-based detentions. For these and other reasons, justice system stakeholders are interested in citation in lieu of arrest policies, particularly for low-level crimes. One common question that stakeholders have been asking is: What do we know about how often officers use citations or make arrests in North Carolina? Read on for answers.

Working with court system data we compiled a statewide and county-level analysis of the prevalence of citation use in North Carolina. Because we knew that a misdemeanor charge with an associated felony was more likely to result in arrest, we limited our data to cases where the highest charge was a misdemeanor. Specifically, we examined North Carolina Administrative Office of the Courts (NC AOC) data on initial process type. For this analysis, we were interested in the percentage of highest charge misdemeanor cases where the officer issued a citation as opposed to making a warrantless arrest (in a forthcoming analysis we look at a similar decision point at the magistrate level, comparing issuance of summons to issuance of arrest warrants). Because a magistrate’s order is the proper process to issue after a warrantless arrest, we calculated the percentage of charges initiated by citation from the total of charges initiated by citation and by magistrate’s order. Because we wanted to see any trends in the data, we did all this for three years, 2016-2018.

(Data note: Because we were focused on the officer’s decision to cite or arrest, the universe of cases we examined includes only cases initiated by citation or magistrate’s order. The reported percentage shows how often officers opted for citation during this first interaction, not how often a citation was the initiating charging instrument for all initiated cases (a larger universe which includes, e.g., those initiated by warrant, indictment, etc).) 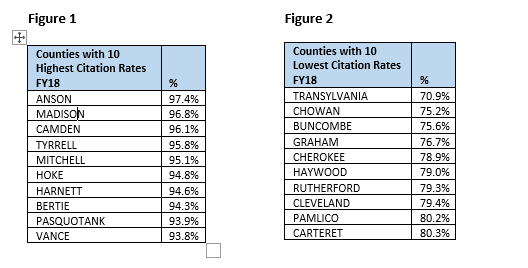 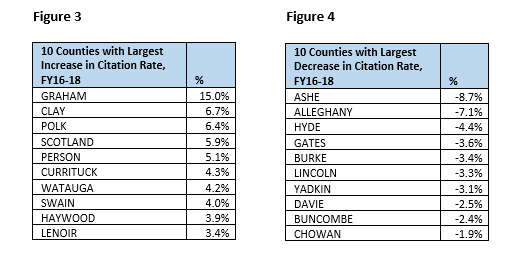 Looking to better understand local citation usage, we compared our results to NC State Bureau of Investigation violent crime rates and to whether or not the Local Bail Policy supported citation in lieu of arrest for minor offenses. We found no obvious relationships to either of those benchmarks. In further research we hope to connect with law enforcement leaders to learn what is driving local practices.

To be clear, we are not making any judgment in this paper. There may be very good reasons why law enforcement in any given county use citations in a smaller percentage of misdemeanor charges. For example if the majority of misdemeanor charges in a jurisdiction involve domestic violence, physical violence, stalking and use of a firearm, we would not be surprised to see a lower rate of citation usage, as many believe these scenarios present a greater public safety risk. The purpose of this paper simply is to document the prevalence of citation use in North Carolina and give jurisdictions a baseline against which to evaluate their systems.

We end with three notes about the data. First, although we sought to limit our analysis to cases where the highest charge was a misdemeanor, our efforts may have been imperfect. We worked off of a NC AOC data set showing the initial process type issued for highest charge misdemeanor cases. When multiple charges are associated in a single case number, the system can limit the data set to highest charge misdemeanor cases. We understand, however, that in some counties multiple charges are not associated with the same case number. When this happens, the system cannot separate misdemeanor charges from associated felony charges because they are not linked through a common case number. Thus, some of the misdemeanor charges in our sample may have been associated with a felony. (To the extent this occurred we hypothesize that it would suppress citation rates.) Second, we sought to examine first process type (i.e. the process that initiated the case) and we understand that for the most part the data we received reflects that. However, we also understand that in some cases the clerk may have updated the relevant field to reflect a later process, such as a statement of charges. If that occurs, original charge information is overwritten and the charge would not be captured in our analysis (which looked only at highest charge misdemeanor cases where the initial process was a citation or a magistrate’s order). Finally, although a magistrate’s order is the proper process when an officer makes a warrantless arrest, we know that sometimes an arrest warrant is issued after a warrantless arrest. Instances where this occurred would not be captured in our data set, which again was limited to cases where the initial process was a citation or magistrate’s order.