In a series of posts I’ve been discussing bail reform, including highlighting pilot programs underway in North Carolina. In 2018, I worked with stakeholders in North Carolina’s Judicial District 30B (Haywood and Jackson counties) to help them identify and implement a basket of pretrial reforms. One of the implemented reforms is a new decisionmaking framework for determining conditions of pretrial release. Key features of the framework include:

What Are the Reasons behind the Reform?

The District’s old Local Bail Policy included a table setting suggested bond amounts based on the punishment class of the charged offense. Best practices recommend against the use of such tables. ABA Standards for Criminal Justice: Pretrial Release, Standard 10-5.3(e) (3d ed. 2007) (“Financial conditions should be the result of an individualized decision taking into account the special circumstances of each defendant, the defendant’s ability to meet the financial conditions and the defendant’s flight risk, and should never be set by reference to a predetermined schedule of amounts fixed according to the nature of the charge.”). Additionally, stakeholders determined that although the current charge’s offense class is relevant to the bail decision, other individualized factors regarding the defendant and the circumstances of the offense are important in assessing appropriate conditions of pretrial release. Moreover they found that the old Bail Policy and its bond tables tended to push decisionmakers towards a secured bond in contravention of state law, which requires release on a written promise, custody release, or unsecured bond unless the decisionmaker finds that those conditions will not reasonably assure appearance; will pose a danger of injury to any person; or are likely to result in the destruction of evidence, subornation of perjury, or intimidation of witnesses. G.S. 15A-534(b). And finally, stakeholders wanted to develop an easily implemented tool that would quickly identify those defendants who can be released on non-financial conditions, to reduce the occurrence of wealth-based incarceration of individuals who pose little risk to public safety or of flight. (Because a written promise, custody release, and unsecured bond require no money up front to secure release, I refer to those conditions as “non-financial conditions.”) Although stakeholders considered available empirical risk assessment tools for that purpose, they did not opt for such a tool, in part because they lacked the resources necessary to gather the input information required by these tools. Instead, they opted to create a screening device based on easily determined defendant- and offense-specific factors. The new framework (here) applies in all circumstances except where the statutes require other considerations or outcomes.

In a rural district with limited resources, stakeholders wanted an easily implemented, stakeholder-created tool to quickly identify low-risk defendants who immediately can be released on non-financial conditions. Under the new framework, defendants charged with misdemeanors and Class I-F felonies are screened for a set of risk factors; if none apply the framework recommends imposition of non-financial conditions. The risk factors—pulled right from the framework’s flowchart–include: 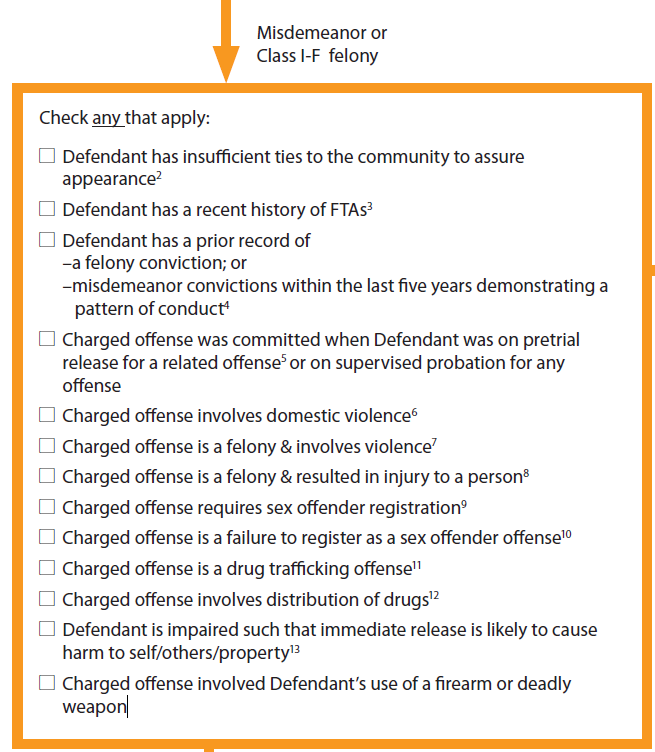 Detailed notes incorporated into the framework explain these factors in more detail.

How Does the Framework Incorporate the Statutory Preference for Non-Financial Conditions?

It’s built right into the flowchart. If the defendant isn’t screened off for imposition of non-financial conditions, the following flowchart box applies:

What about State Statutes that Specify Conditions?

They control. The new framework applies in all cases except where the North Carolina General Statutes prescribe a different outcome or result. One example of when the statutes control is when the statutory bond doubling provision in G.S. 15A-534(d1) applies.

Who Uses the New Framework?

Everyone. The new framework applies to all pretrial decisions, whether made by a clerk, magistrate or judge.

What about the Role of Discretion?

It’s preserved. The new framework simply makes recommendations; the flowchart clearly provides that deviations are permissible. They must, however, be documented.

Logistically, How Was It Implemented?

After District stakeholders identified this reform as a priority, I drafted an Implementation Plan, including a proposed flowchart. (Hat tip to Senior Resident Superior Court Judge Bradley Letts who proposed the idea for a flowchart!) I then vetted the plan and flowchart with stakeholders. The vetting process included having stakeholders run a healthy set of scenarios through the flowchart to ensure that it was working as intended, meaning that the recommendations were in line with what stakeholders wanted. We ran scenarios twice, and each testing resulted in modifications to the flowchart. Even after that, we kept tweaking until folks were happy with the results. Once they were, the Senior Resident Superior Court Judge incorporated the framework into a new Local Bail Policy, which took effect January 1, 2019.

How Will the Pilot Be Evaluated?

The Judicial District 30B reform project includes an evaluation component. In partnership with Professor Jamie Vaske of Western Carolina University, evaluation of this and other reforms is underway. Professor Vaske will be looking at the impact of this change against a set of core pretrial metrics. The evaluation period runs through the end of the calendar year, and Professor Vaske will produce a report to stakeholders after that date. I’ll post an update when we have information from that evaluation.