In this post, part of a series on bail reform in North Carolina, I highlight reforms that have been implemented in Orange County, North Carolina. My goal in doing so is to provide models and points of contact for jurisdictions interested in these efforts. If you’d like your jurisdiction’s work highlighted here, please reach out to me.

The information in this post came from an interview I did with Caitlin Fenhagen, Orange County’s Criminal Justice Resource Director and Ted Dorsi, that County’s Pretrial Release Case Manager. Thanks to both of them for taking the time to speak with me.

According to Cait, the most significant Orange County reform is implementation of an actuarial risk assessment tool for every defendant who has a first appearance, along with a decision making framework that pairs release conditions to assessed risk. The risk assessment tool adopted in Orange County is the Virginia Pretrial Risk Assessment Instrument-Revised (VPRAI-R). Although not all risk assessment instruments require an interview with the defendant, the VPRAI-R does. Thus, Ted interviews all defendants in jail prior to the first appearance. This includes not only defendants who have been arrested on new charges but also those arrested for probation violations and failures to appear. During the interviews, Ted provides information to defendants about the purpose of the upcoming first appearance hearing and gathers risk and needs information relevant to the judge’s determination of pretrial release conditions. Using the VPRAI-R, staff examine an established set of risk factors, such as whether the current charge is a felony and whether the defendant has prior failures to appear. Each risk factor is assigned a point value. The relevant risk factors and the points assigned to them are shown in Figure 1 below.

Points then are added together to determine the defendant’s risk level. The lowest risk level is 1; the highest is 6. Figure 2 below shows the conversion from raw score to risk level. 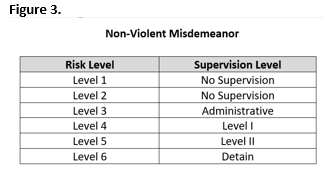 Prior to implementing the VPRAI-R, Orange County did a 90-day pilot of the tool to assess impact on outcomes. The county has not yet done a validation of the risk assessment tool. 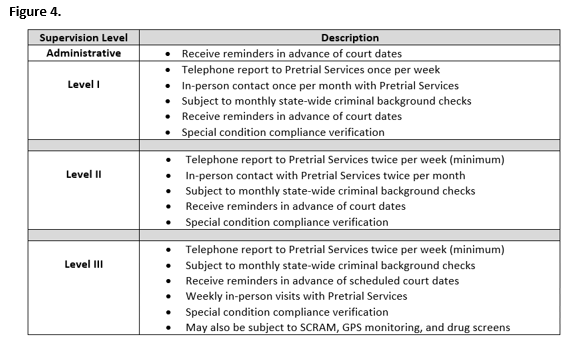 In addition to supervision, pretrial staff may refer defendants to mental health and substance use services. Staff also support defendants with respect to court appearance, including providing assistance with enrollment in the NC AOC automated court date notification system and transportation, though there is no formal program to provide transportation assistance.

The County’s pretrial staff includes Cait and Ted, both of whom work full time. Additional support is provided by a licensed clinical social worker, who spends part of her time on the pretrial program, a second social worker who serves as a diversion coordinator, and a part-time psychologist who focuses on defendants under age 18.

Cait and the team are eager to continue improving their pretrial program, and are working with researchers to seek grant support for a project to increase court appearance rates. If that grant money is obtained, it would fund two new county positions including a pretrial case manager, who would work in the magistrate’s office, and a court liaison to work directly with defendants in court. Both positions would help with case management and seek to reduce barriers to appearance with tools such as transportation or child care vouchers. The case manager in the magistrate’s office would perform risk assessments for use in the magistrate’s determination of pretrial conditions at the initial appearance. Separately, the team is interested to do a validation study on the VPRAI-R and to look at how often judges’ pretrial decisionmaking aligns with staff recommendations.