Another Visit to DART Cherry

I wrote about DART Cherry in this prior post after taking a different group of lawyers and court officials there in 2016. It is the only state-run substance abuse treatment program for men on probation. The counterpart program for women is in Black Mountain. There is no fee for either program.

DART Cherry is a 90-day program for probationers (and, to a lesser extent, post-release supervisees and parolees). Nobody serving a fully active sentence in prison or jail goes to DART Cherry while they are incarcerated—regardless of what a judge might recommend or order. Substance abuse programming in prison is sometimes referred to as “DART,” but the proper name for prison-based programming nowadays is Alcohol and Chemical Dependency Programs. Most county jails lack any sort of similar programming.

So, if a judge would like to send someone to DART Cherry, he or she should not order an active sentence or revoke the defendant’s probation. Instead, place or keep the person on probation and order DART Cherry as a residential program under G.S. 15A-1343(b1)(2).

Some will say that even DART Cherry imposed as a condition of probation is merely a recommendation on the part of the judge, not an order. That notion stems from G.S. 15A-1343(b3), which says that a defendant must be screened and assessed before participating in the program, and that only those defendants who show a certain need for treatment will be allowed to participate—regardless of what the judge said. That statute has been on the books for a long time, but it is very rare for a person ordered into a treatment by a judge to be turned away based on an assessment that shows no actual chemical dependency.

The other pathway to DART Cherry is to order it as the place of confinement for a split sentence. Now I know I just said that DART Cherry couldn’t be part of an “active” sentence, but remember that split sentences are actually confinement ordered as a condition of probation. And G.S. 15A-1351(a) (for splits imposed at sentencing) and G.S. 15A-1344(e) (for splits imposed in response to a violation of probation) allow a “treatment facility” to serve as the place of confinement for certain splits. It’s relatively rare, and when it does happen it’s usually for a DWI. For example, we heard of judges satisfying the requirement for a 120-day split for an Aggravated Level One DWI by ordering 90 days at DART Cherry and 30 days in the jail. If you’re going to use the program for a split, bear in mind that it is not enclosed, and the resident could depart fairly easily.

If DART Cherry (or Black Mountain) is ordered as the place of confinement for a split, the defendant’s suspended sentence must be long enough to satisfy the “one-fourth” rule for special probation confinement. If the program is ordered as a residential program, there is no statutory requirement that the defendant have a suspended sentence in excess of 90 days. The program will accept defendants with shorter sentences. 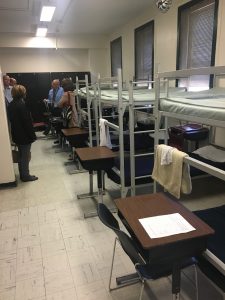 What is life like for the men who reside at DART Cherry? We spoke to several residents who described a fairly structured day—up around 5:00, chores, classwork, treatment group, free time, and more classwork and group time. The treatment regime at DART Cherry is built around the A New Direction workbook series, a cognitive behavioral treatment curriculum that bears some resemblance to the Carey Guide series that probationers use to work on other life areas. The treatment staff was kind enough to give us a full set of the books, and you’re welcome to take a look at them next time you visit the School of Government. 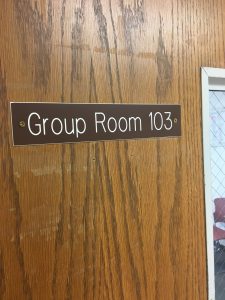 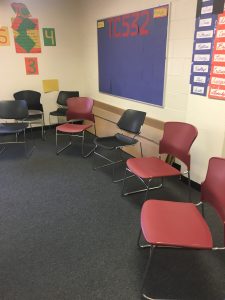 Treatment groups take place in unassuming rooms that, to me, look more like something from a middle school or community center than a medical facility.

No category of probationer is categorically barred from attending DART Cherry. Sex offenders may attend. Defendants on probation pursuant to a conditional discharge or deferred prosecution may attend. And defendants who have other pending charges may attend as long as their court dates are continued out beyond their projected class completion date.

We had a good visit, and—as always—learned a lot. Thank you to the program leadership, treatment staff, and probation staff who welcomed us and answered our many questions—especially as they were still recovering from the recent hurricanes. Thank you to the thoughtful judges who took the time to attend. 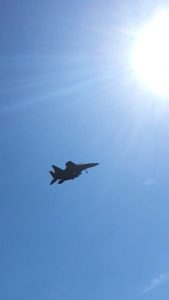 We concluded the day with lunch at Wilbur’s. And as if that weren’t Goldsboro enough, a group of F-15E’s flew directly overhead as we boarded the van to head back to Chapel Hill. We’ll do more visits in the future.