A Feast of Criminal Law

Because of the short Thanksgiving week stateside, it has been a couple of weeks since my last blog post. I want to use this post to catch up on the goings-on here, both Thanksgiving and criminal justice related.

Of course, the UK doesn’t celebrate Thanksgiving, which to the students’ dismay meant no days off. Nevertheless, we hosted 34 UNC students, parents, and friends for a sumptuous Thanksgiving potluck dinner, a little taste of home away from home. If the food had not disappeared so fast, I would post pictures of the eclectic dishes at the feast—from the four turkey crowns we cooked to the North Carolina-style barbecue sandwiches and UK-style sausages wrapped in bacon brought by others. My wife and I had optimistically planned to go away for the weekend but, like many Americans, we were so exhausted that we slept in. 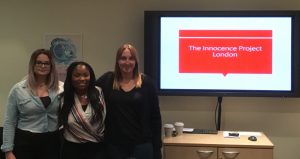 Criminal justice class continued uninterrupted. We heard from Louise Hewitt, a faculty member at the University of Greenwich School of Law and co-director of the Innocence Project London, and two of her students, Trudie Amarh and Lidia Stocia (from right to left).

The Innocence Project London is a member of the international Innocence Network, based in New York. Like innocence projects in the US, the London Innocence Project investigates claims of wrongful convictions and presents potentially meritorious claims for further review—in the UK to the Criminal Cases Review Commission (CCRC). If the CCRC finds that the claim has merit, it sends the case back to the appellate court for decision (rather than to a panel of trial judges, as in North Carolina). For more information about the Innocence Project London and the CCRC, see their respective websites. For an excellent review of cases heard by North Carolina’s Innocence Inquiry Commission, see Robert P. Mosteller, N.C. Innocence Inquiry Commission’s First Decade: Impressive Successes and Lessons Learned, 94 N.C. L. Rev. 1725 (2016). 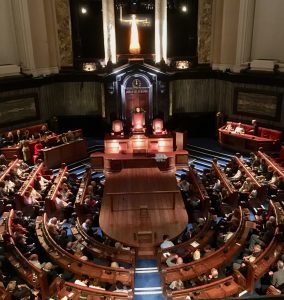 Due to the synergy of the study abroad program, our criminal justice class was able to take advantage of another opportunity: joining the theater class for a performance of Agatha Christie’s masterful Witness for the Prosecution. The play, staged at London’s incomparable County Hall (pictured), had several twists and turns, which I won’t give away, plus some stirring courtroom scenes, including some dramatic cross examination.

If only cross examination were so easy! To give the undergraduate students a sense of what cross-examination is actually like, we spent some class time planning and executing a cross based on a case problem. All of the students got a chance to question witnesses. All did quite well, particularly considering they were first timers. And, as in real cases, all learned that cross-examinations do not go as smoothly as in theatrical productions. They gained an appreciation for the adage (apologies to the Rolling Stones) that you can’t always get the answers you want on cross but, if you phrase your questions properly, sometimes you get the answers you need.

For our final class sessions, the students will be doing presentations on research topics of their own choosing. I look forward to hearing and reporting on their insights.