A Quarter-Century of Structured Sentencing

The governor has proclaimed today, October 1, 2019, as Structured Sentencing Day. It has been 25 years since North Carolina’s primary sentencing law for felonies and misdemeanors came into effect. Let’s take a moment to reflect on a quarter-century of grid-based sentencing. 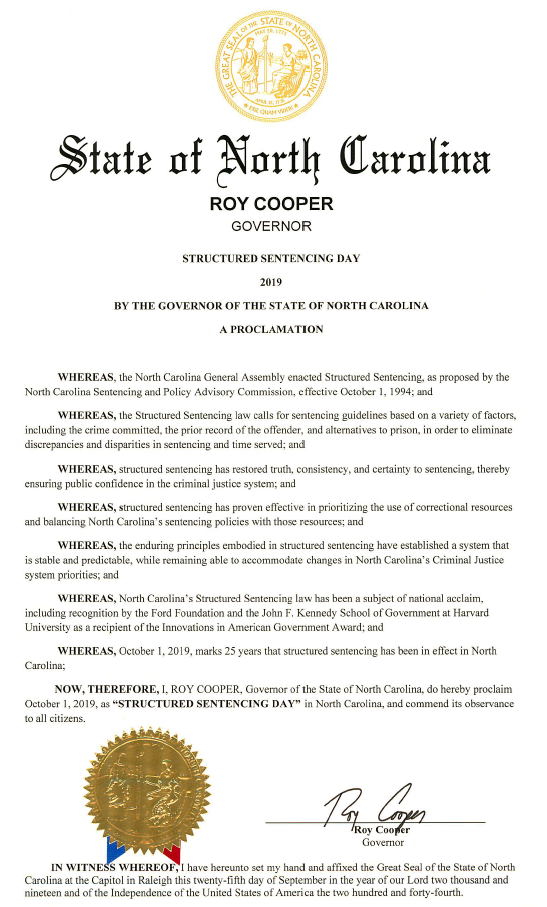 The General Assembly passed the Structured Sentencing Act, S.L. 1993-538, in 1993. It was initially slated to come into effect for offenses committed on or after January 1, 1995, but that date was advanced to October 1, 1994 during a special legislative session focused on crime.

To understand the origins of Structured Sentencing requires some knowledge of the state of affairs in North Carolina’s correctional system in the 1980s and early 1990s. You can read the full history here (it’s not that long, and if you’re a reader of this blog I know you’ll find it interesting), but the short version goes like this. Under Fair Sentencing (the sentencing law in effect from 1981 to 1994), North Carolina’s prison system became overcrowded to a point of crisis. The legislature enacted a prison population cap and gave the Parole Commission the power to release prisoners early to stay under it. The court system responded by imposing longer sentences, knowing that they would be discounted on the back end through early release. There was an overwhelming sense that sentences were not truthful, as many inmates would serve only a fifth (or less) of their imposed prison term before being released. And in any event the early release efforts were not enough, as federal lawsuits loomed and overcrowded conditions persisted.

You cannot tell the story of Structured Sentencing without highlighting the role of the North Carolina Sentencing and Policy Advisory Commission. The Sentencing Commission was created in 1990 to research and ultimately recommend to the General Assembly a sentencing structure that would achieve the purposes of sentencing through a correctional system that could be modeled to predict its financial impact.

Simple, right? All we need you to do is define what justice is, and do it in such a way that a computer can help us predict how much justice we can afford.

Then, as now, not everyone agreed on the proper moral and philosophical underpinnings of a sentencing regime. But it is a testament to the sound work of the Commission that the purposes of sentencing codified in G.S. 15A-1340.12 have survived without amendment since their enactment in 1994. And the structure created to implement those purposes hasn’t changed much either. The grid was amended in 1995 to change some of the minimum terms of imprisonment; in 2009 to change the Prior Record Level scale and make the minimum sentence ranges proportionate (changes I described here in the early days of the blog); and in 2011 to implement part of the Justice Reinvestment Act by adding time for post-release supervision for all felonies. That’s it (aside from three rounding errors corrected in 2013).

As to predictability and the goal of matching policy to resources, the law—and the Sentencing Commission—have been an amazing success. The figure below shows the percentage difference between the Commission’s projected prison population and the actual prison population for every year of Structured Sentencing. In 2007, the difference between the projected and actual populations was 9 inmates. 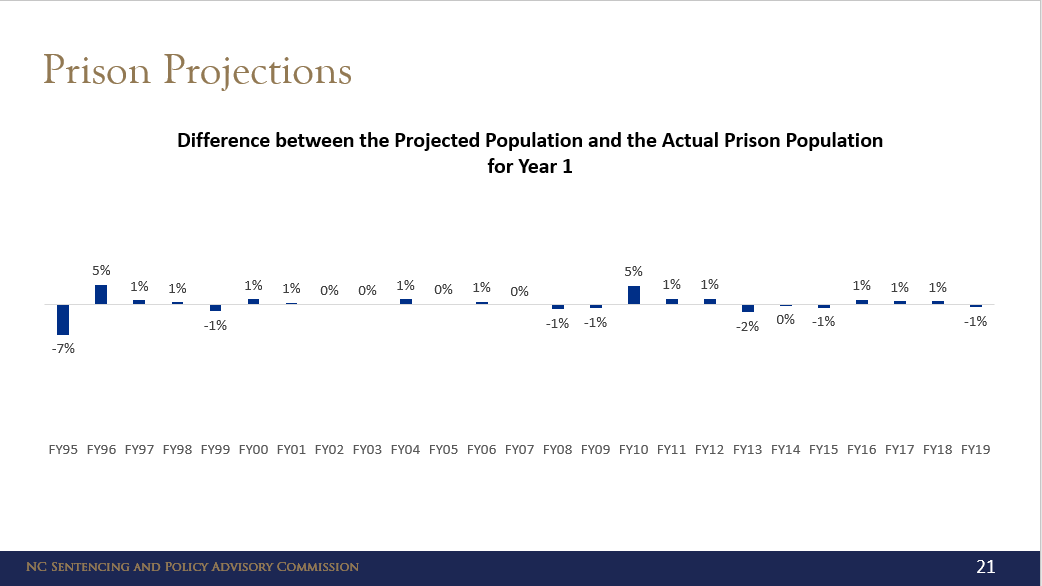 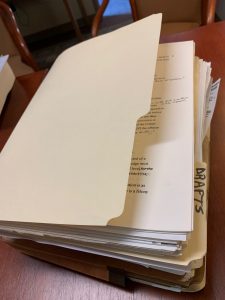 Several of my present and former colleagues at the School (then Institute) of Government played an important role in the development of Structured Sentencing, including my friend and mentor Jim Drennan. He wouldn’t want me to make a big deal about it, but Jim wrote the first versions of what eventually became the law. I have his notes and drafts in my office, and I reference them like the Federalist Papers when I’m trying to figure out what certain part of the law mean.

There are some interesting things in there. Among many others, Jim pointed out in a margin note that the law’s new definition of “prior conviction” would likely result in PJCs counting for points. He also noted that DWIs were excluded from the new law and would thus remain subject to a what he called a “hodgepodge” of parole rules. 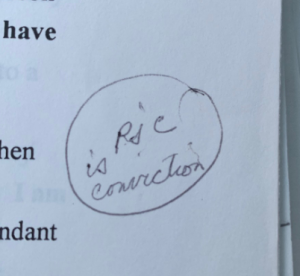 (Still true.) Above all, notes scattered throughout the files demonstrate Jim’s careful work to help the Sentencing Commission and the General Assembly respond to a really complicated problem—all the while staying true to the School’s valued traditions of nonpartisanship and nonadvocacy.

I don’t know where Structured Sentencing is in its life cycle. Maybe it’s still in its infancy, with new ideas about risk assessment and restorative justice yet to be fully incorporated. Maybe it’s just now coming into adulthood, with Justice Reinvestment serving as a sort of awkward adolescence. Or perhaps it’s near its end, with legislation like pending H.B. 511, which would allow certain inmates to be released before serving their minimum sentence based on Parole Commission findings, inching us back toward an indeterminate system. Regardless, one of its virtues is that there are many ways it can be amended to reflect new policy choices.

Is the law perfect? Of course not. Some argue that the numbers are too high—or too low. Some say that the law transfers too much sentencing power to prosecutors. Some say it prioritizes consistency over the need to tailor the punishment to the individual defendant. Some say that the law’s focus on “truth in sentencing” places too much emphasis on retribution and not enough on rehabilitation. And some might note that in spite of prison closures and a shrinking correctional population, the prison system is still facing staffing shortfalls. These are all legitimate criticisms. Though reasonable minds can differ about who ought to go to prison and how much time is enough, fans of good government can applaud a system that gives stakeholders accurate information about the resources needed to carry out the decisions they make each day in the administration of justice.