A Different Approach to “Collateral” Consequences of a Conviction

In recent years North Carolina has made several reforms in the field of collateral consequences, expanding opportunities for expunctions of convictions, authorizing courts to issue certificates of relief to limit collateral consequences, and requiring that licensing agencies consider whether a nexus exists between applicants’ criminal conduct and their prospective duties, among other factors. See G.S. 93B-8.1. The changes are helpful but incremental. Our most recent criminal justice class challenged the extensive reliance on collateral consequences in the U.S., the effectiveness of current remedies, and ultimately barriers to reintegration into society of people who have previously been convicted of a crime. 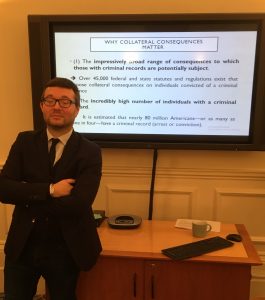 I had the good fortune of meeting Dr. Alessandro Corda and recruiting him to co-teach the class. Dr. Corda (left) teaches law at Queen’s University in Belfast and specializes in, among other things, the collateral consequences of a conviction. He is both a European scholar and American lawyer, with a Ph.D. in Criminal law and Penal Policy from the University of Pavia in Italy, an LL.M. from NYU School of law, and experience as an adjunct law professor at the University of Minnesota Law School. See more about his work here.

We began the conversation with the magnitude of collateral consequences in the U.S. They reach into virtually every aspect of a person’s life, including employment, housing, education, and civic rights such as the right to vote. Estimates peg the number of collateral consequences under federal and state law at approximately 45,000. This number represents de jure consequences only—those imposed by statutes and regulations. It doesn’t include unregulated de facto collateral consequences imposed by private employers, landlords, and others—in essence, decisions not to do business with someone who has a prior conviction. “Extensive and sticky CCs [collateral consequences] of conviction represent one of the salient facets of contemporary America’s penal system.” Alessandro Corda, The Collateral Consequence Conundrum: Comparative Genealogy, Current Trends, and Future Scenarios 69, 76, in After Imprisonment: Studies in Law, Politics and Society (Austin Sarat ed., 2018). (You can find an abstract of the article on the website of the Collateral Consequences Resource Center.)

Implicit in the above observation is an “emperor has no clothes” point. Although American courts have repeatedly characterized collateral consequences as civil regulatory measures, separate from criminal proceedings, the reality is that they “perpetuate penal control.” Id. at 76. Although labelled as nonpunitive and collateral, they are hardly collateral to a defendant and in some instances dwarf the punishments imposed in the criminal case. Id. at 88–89.

Dr. Corda proposes that the law integrate collateral consequences into sentencing, as is generally done in European penal systems. If considered part of the criminal punishment scheme, collateral sanctions would, like other criminal punishments, be systematized, reduced in number, and authorized only when connected to the offense being sentenced and for an appropriate length of time. Id. at 89. Further, treating collateral consequences as criminal penalties “would enable sentencing courts to better calibrate the sentence.” Id. at 88–90. In other words, they would be better able to make the punishment fit the particular crime.

The widespread availability of criminal record information also creates barriers to reintegration of offenders. In another recent article, Dr. Corda writes: “Today’s ubiquitous system of access to criminal records—through government databases and websites as well as commercial providers [criminal background check companies]—make it nearly impossible for an individual to leave her criminal history behind.” Alessandro Corda, Beyond Totem and Taboo: Toward a Narrowing of American Criminal Record Exceptionalism, 30 Federal Sentencing Reporter 241, 241 (2018). Drawing from the European tradition of the “right to be forgotten,” he proposes among other things that criminal record information be treated more like family court records, confidential except in specified circumstances. For example, information about relevant convictions would still be available to employers in their fields of employment. Alternatively, criminal court records would not be made available online or sold in bulk to private entities. They would only be accessible in person in court offices, resulting in “practical obscurity” of the information. Id. at 248; see U.S. Dep’t of Justice v. Reporters Committee for Freedom of the Press, 489 U.S. 749, 764 (1989) (recognizing “a vast difference between the public records that might be found after a diligent search of courthouse files, county archives, and local police stations throughout the country and a computerized summary located in a single clearinghouse of information”).

Dr. Corda recognizes that reforms of this nature would have little appeal to background check companies and the press; however, he urges that “access to and disclosure of criminal history records should be balanced against the aggregated societal interest to a successful reintegration of ex-offenders.” 30 Federal Sentencing Reporter at 244.

Whether the specific changes proposed by Dr. Corda would be able to gain traction in the U.S., it seems important to think outside the usual collateral consequences box given the magnitude of the problem.