Local jails are an important part of the state’s criminal justice system. Jails house, among others, individuals held pretrial, serving sentences, and held for federal and other authorities. In this report and in the accompanying spreadsheet (here), we provide information about North Carolina jail occupancy rates. Among other things, we find that:

For this assessment, we used information reported to state authorities. Specifically, the North Carolina Administrative Code requires the sheriff or the administrator of a regional jail to submit a monthly report to the Jail and Detention Section of DHHS’ Division of Health Service Regulation.[1] Police chiefs likewise are required to report monthly on the occupancy of municipal lockups.[2] According to DHHS, those required to report do not include a count of inmates housed in other counties; rather they count only individuals physically present in the facility.[3] A jail that is housing individuals for another county would include those persons in its count.[4] We obtained a compilation of reported data from DHSS and it serves as the basis for this report.

Before we present our results, several notes are in order. First, because the Administrative Code does not require reports to break down jail populations by detention type (e.g., serving a sentence, pretrial), our analysis is limited to overall jail populations. Second, reporting is done by facility. To arrive at county-level data, we located each facility and combined data to arrive at county-level numbers. Third, notwithstanding the requirements of the Administrative Code, reporting to DHHS is incomplete. Specifically, jail populations were not consistently reported for all facilities for all months. Fourth, some facilities are listed in the DHHS report as having capacity but in fact were damaged or otherwise not in commission, and thus did not accept occupants in 2018. Because we wanted to understand 2018 jail occupancy rates in confinement facilities that were fit to accept occupants, we had to address these last two issues or risk understating occupancy rates. To do that, we took two steps. First, we contacted local officials to identify jails that were unable to house inmates. For each such facility, its capacity was removed from the totals.[5] Second, when a jail was missing monthly data due to failure to report, capacity for that month was removed from calculation of monthly occupancy rates to avoid deflating those rates. A full spreadsheet of our results is available at the link provided above.

Statewide in 2018 the average jail occupancy rate was 80.9%. North Carolina jails reported an annual capacity of 23,913 and an average statewide jail population of 19,344. Monthly statewide occupancy rates ranged from a low of 77.3% in January and March to a high of 85% in October. 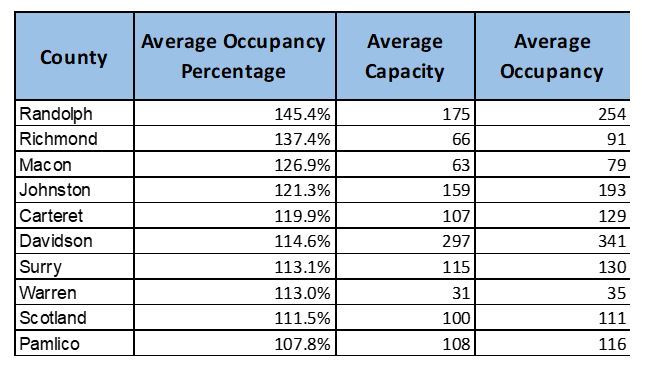 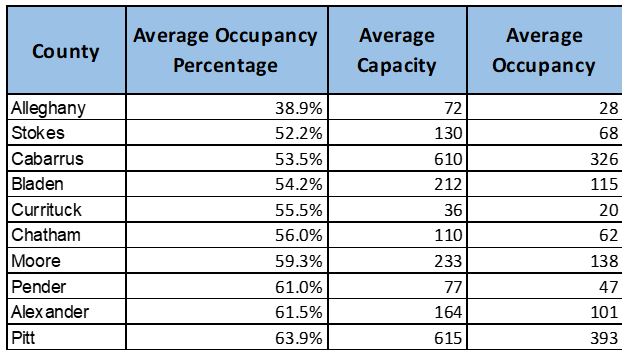 For 2018 as a whole, 19 of the 93 counties that have operating jails exceeded their average in-county capacity. Of these counties, occupancy ranged from 100.6% to 145.4%. An additional seven counties have no in-county operating jails[6] and are required to house detainees elsewhere; for purposes of this analysis we treat these counties as over-capacity. Thus, 26% of North Carolina’s 100 counties exceeded local jail capacity for 2018 as a whole when including jurisdictions that have no in-county facilities housing occupants.

To further examine pressure on jail capacity, we looked at jails that exceeded 90% of capacity. The table immediately below lists 34 counties that experienced capacities exceeding 90% for all of 2018.[7] This paper does not seek to explain deviations in occupancy or critique county and facility practices. Rather it presents 2018 jail occupancy rates and provides data on counties and facilities that are over or near capacity. As noted above, reporting to DHHS includes only inmates physically present in the facility; it does not include inmates under local supervision but housed out-of-county. If a county or facility is housing individuals elsewhere because of capacity issues, the DHHS data may understate pressure on capacity. Data on total number of inmates under supervision is maintained by the local jails and may be an additional information source for those wishing to explore this issue further.

Any input, suggestions, or questions are appreciated as we continue to analyze and communicate these findings, which we plan to update annually. The spreadsheet noted above contains the county and state data discussed here.

This post is based on a report coauthored by Ross Hatton, UNC MPA Graduate Research Assistant.

[5] Includes Jones County Jail from September through December and the Wake County Detention Center Annex for all of 2018.

[7] This table does not include the above seven counties, as they have no occupancy rates.

[8] Excludes the Wake County Detention Center Annex, as it was not fit for use in 2018. Includes data for Jones County Jail for the eight months that it was operating.