There must be some sort of planetary alignment taking place today: Duke, UNC, and NC State all play in the NCAA men’s basketball tournament, the new iPad goes on sale, and best of all, it is time for another news roundup.

1. This week’s headlines center on Forsyth County, because the state supreme court just suspended District Court Judge Denise Hartsfield, without pay, for 75 days. The court’s opinion is here. The judge’s conduct seems to have included having a clerk transfer motor vehicle cases from other judges’ calendars to her own when the cases involved the judge’s friends or acquaintances. The judge would speak with the defendants ex parte outside of court, and then would enter favorable dispositions in the cases, all without hearing the cases in court and without requiring the defendants to appear or to enter a plea. The Winston-Salem Journal has more here. Former Forsyth County District Attorney Tom Keith, who first reported the judge’s misconduct, is quoted as calling the sanction a “slap on the wrist.” The School of Government played a minor role in the matter. Faculty member Jim Drennan advised Judge Hartsfield to stop another of the practices at issue in the disciplinary proceedings: she disagreed with the prosecution’s policy of refusing to dismiss DWLR cases upon the defendant’s showing that he or she had subsequently obtained a valid license, so she often simply dismissed such charges on her own motion, without the consent of the prosecution and without a legal basis.

2. The latest U.S. News law school rankings are out. Duke’s position is unchanged at number 11, while UNC has dropped from 30th to 38th. Above the Law breaks it down here.

3. Meanwhile, Forbes has these “show me the money” rankings, which are based exclusively on the average income of each school’s graduates. (The short version is that Columbia tops the list, while Duke is eighth.)

4. Finally, the picture below was taken from Steven Mulhall’s Facebook account. He posted it after stealing Judge Orlando’s nameplate. It is now pretty powerful evidence in the criminal theft case against Mulhall. The sheriff of the Florida county in which the crime summed it up by characterizing Mulhall as an “idiot.” 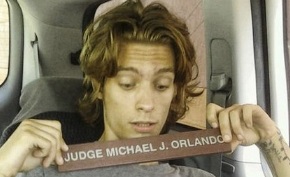