How Can the NC Judicial College Help Combat Systemic Racism?

The Dean of the School of Government, Mike Smith, shared a message last week recognizing the need for action to bring about real and enduring progress on issues of race and bias. He noted that while learning about racism, focusing on our shortcomings, and improving ourselves is important, “[n]one of those things will be enough if they are not accompanied by a commitment to addressing racial inequities in government and improving outcomes for African Americans.” The dean included a two question survey seeking input from the government officials with whom we work about how we can best support their efforts to address systemic racism.

I shared the dean’s message with the Judicial Branch officials with whom we work, asking them to complete the survey and encouraging them to reach out to me individually to discuss how the North Carolina Judicial College might assist in these efforts. 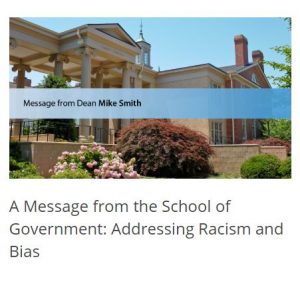 Among the suggestions I have received is that we teach the topic of implicit bias more often, that we create a space for people to share their personal and professional experiences with racial inequity, and that we teach about the history of racial injustice in the United States. All of these are excellent suggestions; yet they are unlikely to be enough on their own to effect real change.

PBS News Hour recently published an interview with social psychologist Anthony Greenwald, a pioneer in the field of implicit bias and creator of the implicit association test, in which Greenwald shared his skepticism about whether implicit bias training changes behavior. Greenwald characterized most implicit bias training as “window dressing that looks good both internally to an organization and externally,” and noted that it was being used without an assessment of whether it was bringing about the desired results. Greenwald also noted the lack of empirical evidence that encouraging people to act with intentionality and to pause before making decisions results in less biased outcomes. To educators eager to change discriminatory practices and biased decision-making, this message is disheartening. Fortunately, Greenwald pointed to a two-fold intervention whose positive effects are supported by research: first, document bias-related disparities; second, eliminate discretion.

Greenwald provided an example based on law enforcement operations. If a law enforcement department collected and analyzed demographic data on which citizens were stopped for traffic violations and the actions that were taken during a stop, they could ascertain whether there were disparities among which citizens were stopped and how they were treated. If disparities were shown, then department heads could determine why those disparities existed and whether bias and racism played a role. If they did, the department could adopt processes and procedures to reduce or eliminate discretion in circumstances involving subjective judgment by officers. Greenwald notes that decisions made with discretion are likely to result in unintended disparities. Yet when those same decisions “are made based on predetermined, objective criteria that are rigorously applied, they are much less likely to produce disparities.”

A real-world example of this approach emerged in Fayetteville a few years ago. Harold Medlock, who was then the city’s police chief, instituted significant changes in his department’s policing practices based on public outcry over consent searches that disproportionately involved black residents and data showing racial disparities in the treatment of persons stopped for traffic violations. Chief Medlock instructed his officers not to stop vehicles for regulatory offenses, such as broken taillights or expired registrations, which often served as a pretext to ask for consent to search a vehicle. Instead, Medlock told officers to stop drivers who commit the sorts of traffic offenses that endanger the public, such as speeding, running red lights, and driving while impaired. Medlock also told his officers to avoid charging the crime of resisting an officer — a charge viewed by some as a way for officers to arrest any citizen who does not cower to law enforcement.

Not surprisingly, traffic stops in Fayetteville—and the resulting searches—declined during Medlock’s tenure. Medlock’s efforts, which included an emphasis on officers interacting in a positive way with the citizens they serve, had some success. Traffic fatalities and overall crime rates declined, and community trust appeared to improve. The racial gap in search rates between white and black drivers was largely eliminated.

One of the judicial branch officials who contacted me after my email last week suggested that statewide data should be collected not just on traffic stops but also to examine how judges rule in criminal, domestic violence and juvenile justice cases to determine whether racial disparities exist.

Greenwald’s opinion doesn’t convince me that we should eliminate implicit bias training. It seems to me that such training still can be useful to demonstrate why biased decisions are made by well-intentioned people. And knowledge of implicit bias can motivate government and court actors to examine the systems that allow unintended biases to impede the administration of justice.

I am, however, convinced that training alone will not bring about meaningful progress and change. Law enforcement and court system actors must gather data, analyze it, and alter systems to reduce discriminatory effects. I welcome your suggestions about the role that the NC Judicial College can play in facilitating that process.

We can, and must, do better.